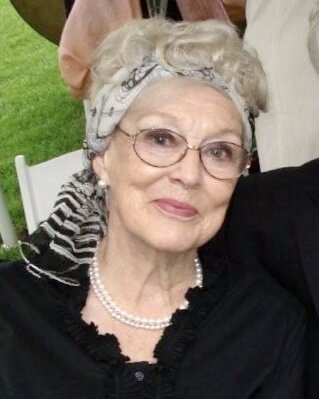 Please share a memory of Shirley to include in a keepsake book for family and friends.
View Tribute Book

It is with great sadness that the family of Shirley Doris Batty, 92, announces her passing on October 17, 2022 at Southlake Regional Health Centre in Newmarket. Shirley passed peacefully, surrounded by the love of her family in her final days and hours.

Shirley was born in London, England on March 18, 1930. She was the third child, and the only daughter of Ernest and Phyllis Carey. Her childhood was a difficult one. Born during the depression, she lived through a war during which she was evacuated and separated from her family and friends multiple times. Incredibly resilient in nature, Shirley was determined to make a good life for herself. After a brief stint as a troupe dancer with the well-known Tiller Girls, Shirley pursued a career in nursing and was stationed at a military base in Germany. She then specialized in pediatric nursing. Later, she became a dental hygienist and worked at the University of Leeds in Yorkshire, England. It was during that time, while attending a local dance, she met Keith who immediately fell in love with her intelligence, beauty and natural grace. Married on September 15 in 1956 in Yorkshire, England, they emigrated to Toronto, Canada. Shortly thereafter, they began a new life creating a large and loving family which is her legacy.

An avid reader, Shirley possessed an insatiable thirst for knowledge and always had a book in her hands. Moreover, it was not uncommon for Shirley to read medical books simply for interest. Many people don’t know that Shirley was a wonderful writer and was known to correct numerous homework assignments in her time. In her younger years, she loved to travel - particularly to England - where a part of her heart remained. A perfectionist by nature, Shirley was a strong and resilient woman with a fierce will and a strong sense of integrity. Indeed, she was a guiding light for the whole family.

Shirley was preceded in death by siblings, Kenneth Carey, Peter Carey and son-in-law, Roderick Barr. She is survived by her loving and devoted husband of 66 years, Keith, her six daughters Beverly (Gord Cousineau), Helena Barr, Janette Batty, Nichola (Brian Stankiewicz), Christina (David Mintz) and Vanessa (John MacDonald). Shirley was a cherished Nana to 15 grandchildren and 10 great grandchildren. She will be greatly missed but her amazing spirit lives on in them all.

Visitation will be held at M.W. Becker Funeral Home, 490 The Queensway South, Keswick, Ontario on Monday, October 24, 2022 from 12 p.m. – 1 p.m. followed by a Funeral Service in the Chapel at 1 p.m. Interment at Keswick Cemetery, 565 Varney Rd, Keswick, Ontario. Sign online condolences at mwbeckerfuneralhome.com

Share Your Memory of
Shirley
Upload Your Memory View All Memories
Be the first to upload a memory!
Share A Memory