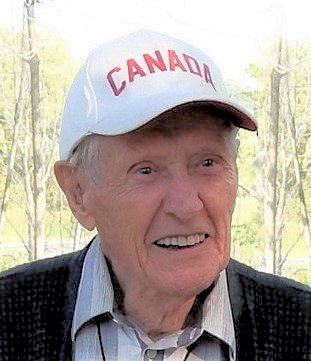 Tom is predeceased by his dear wife Phyllis Wilson, his parents Henry Percy Wilson and Eleanor Mae Barber, his brothers Kells, Don, Jack, Tug and his sisters Eleanor and Shirley, his brother-in-law Graham Lee-Whiting, as well as his daughter Patricia Wilson and granddaughter Amy Taylor.  He is survived and sadly missed by his children Tim (Colleen), Terry (Laura), Ron (Lynda) and Susan (Bern) along with his grandchildren (Chris, Keli, Tom, Rob, Jim, Matthew, Kate, Jennifer, Jesse, Leah) and many great-grandchildren, along with his dear cousins, nieces, nephews, wonderful neighbours and friends. As well, Tom was very fortunate to have wonderful caregivers, Sheila, Carolyn, Mary Ellen, Sunary, Heike, Fiona and Frank, who in his last years and final days were of great comfort. The family will always remember and appreciate all that they gave of their time and love to ensure comfort and care for Tom.  Tom was also loved and comforted by all the incredible staff at Cedarvale Lodge, where he spent his final years in a retirement suite.  He always appreciated and enjoyed the warmth and hugs of all the people that cared for him and of course his wife Phyllis and brother-in-law Graham, and the smiles that brightened their days.

Tom was born in Milliken Mills (Toronto) Ontario in April 1925 and then moved to a farm in Sunderland when the Great Depression hit in 1929. When he was 14 years old, the farm was sold and he travelled with his parents and some siblings out to British Columbia where they became homesteaders in what is now Wells Grey Park.  Tom’s father was a geological engineer who became a prospector out west, and great trauma hit the family when his father didn’t return home from an expedition to seek gold, and was found murdered in his cabin in the bush.  The story of Tom’s family was written about in many community papers and a local book, and his mother is included in a book about pioneer women in the region.  At the time, Tom was only 15 years old. In the aftermath, Tom, his mother and brothers moved back to Ontario by train, traveling for six days sitting up on wood slat seats.

Tom had an incredibly resilient, sharp-witted and adventurous spirit from the very beginning. During his youth, Tom traveled between Ontario and British Columbia by sneaking on to trains and riding across the Trans Canada Railway. Many times he described ‘riding the rails’ to his family and friends, highlighting the great difficulties of the times that he lived in.  Tom then joined the Army at 18 years of age during World War Two. He was stationed in Monteith, near Iroquois Falls, with the Canadian Army at a prison facility for German soldiers.  There he trained World War One veterans who were guarding the prisoners on how to use the new firearms, and he ran the transportation department for the facility.

It was in Iroquois Falls that he met the love of his life, Phyllis Lee-Whiting.  They married on Valentine’s Day in 1948 and were together for over 72 years until Phyllis passed away in November 2020.  Their enduring love for each other was an inspiration to all who knew them. Tom and Phyllis went on many great adventures together in their RV, spending winters in Florida with their friends at Rambler’s Rest Resort in Venice, traveling across the continental United States to participate in square dancing and round dancing events, visiting national parks and spending time with family across Canada from British Columbia to Newfoundland. They also had many wonderful trips, including Alaska, Hawaii, and England.  Through their journeys they met many fantastic people who became their very close friends.

After serving in the Army, Tom went to night school to finish his high school education, working for 12 ½ cents per hour to support his mom and try to make his way in this world.  He tried his hand at farming with a market garden, and lost his whole crop of tomatoes to a hailstorm just a few days before it was time to reap his harvest.  He completed more night school to become a mechanic and was very successful in his chosen vocation, working his way up to service manager at several dealerships in Toronto.  In addition, he was a trouble shooter and advisor to both General Motors Corporation and Chrysler Corporation.  In 1958 he bought a ten acre parcel of land on Boyers Road in Keswick, and cleared trees to build a house and garage.  He and Phyllis started a family-owned business, T. W. Wilson Services Ltd., which was an auto repair shop and gas station, that he ran for almost 50 years.  This was a labour of love for Tom, teaching and mentoring his sons and grandsons along with many neighbourhood youngsters about mechanics and business, providing ‘good service’ to his community.  Tom was known as a generous, practical, and reliable mechanic across town who loved his trade and had a passion for cars for the remainder of his life. He was recently heard saying to his daughter proudly that he “never met an engine he couldn’t fix”.

Indeed, Tom’s approach to fixing a car was his same approach to life. He believed he could accomplish whatever he set out to or solve any problem that was put before him, and he instilled that same “go-getter” spirit in his children and grandchildren. Tom loved to be outside working in his yard, watching the birds and the neighbours drive by, and he always had a project he was working on, including insisting on shingling his own house (with the help of family) when he was in his mid 80’s.  How many men that age would you see climbing up and down a ladder over and over again, taking up one bundle of shingles at a time?  That was Tom’s way, tenacity and hard work.

Tom was a gentle, loving man with an infectious laugh.  In fact, he laughed so hard the tears would roll down his face, especially when he was telling a joke.  The heart of every family gathering, his wide smile, big hugs, and sparkling mischievous eyes were a safe harbour for all whom he loved. Tom was an exceptional storyteller, spoken poet, and loved to sing a song or play the spoons around an open fire.  He remained physically and mentally strong until the very end, with a will and energy that was ‘bigger than life’. May Tom’s incredible strength of spirit and zest for life serve as inspiration for all those who knew him to tackle their own lives with the same optimism, grit, and sense of adventure.  It will serve us all to remember and hold dear Tom’s favourite saying, “It’s Nice to be Nice”.

Private family only Funeral Service at the M.W. Becker Funeral Home Chapel on Friday, March 19, 2021 at 1:00 p.m.  The service can be viewed via Facebook livestreamed at: www.facebook.com/mwbeckerfuneralhome starting at 1p.m.

The family would like to extend a heartfelt thank you to Dr. Kakavand, Dr. Fenkell, and the palliative team.  It is important to note that for many years Dr. Kakavand looked after Tom and Phyllis with great care and a kind heart.  As they lived to a great old age, there were frequent visits to the office for a multitude of reasons, and in the past year, Dr. Kakavand made many visits to see them in their home.  Dr. Fenkell also provided excellent care and encouragement over the fifteen years that Tom visited him regarding his prostate cancer.  Dr. Fenkell was instrumental in assisting Tom to stay in a ‘watchful waiting’ mode for all those years and maintain a healthy strong body and lifestyle.  We are thankful that in Tom’s and Phyllis’s final days, Dr. Kakavand ensured that the palliative team was in place, that care and comfort were a priority, and that all measures were at the ready to aid in a peaceful passing.

In memory of Tom, donations made to Christ Church Anglican, Roches Point, Ontario at https://www.canadahelps.org/en/dn/47845 would be appreciated. Sign an online book of condolences at mwbeckerfuneralhome.com

Share Your Memory of
Thomas
Upload Your Memory View All Memories
Be the first to upload a memory!
Share A Memory