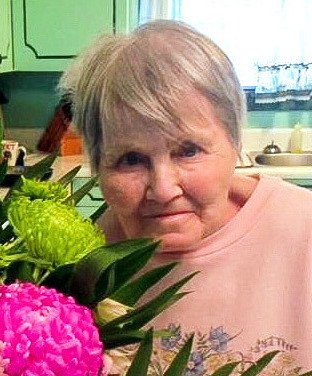 It is with deep sadness that we announce the passing of my mom, Marie Elizabeth Harper (nee Robertson) of Sharon, Ontario, in her 85th year. Marie was born in Newmarket to Kathleen Anne Robertson (nee Purvis) and James Harvey Robertson. Due to the untimely death of her parents, Marie and her siblings, Diane McCutcheon (Karl) and George (Dorothy), were raised by their maternal grandparents, William and Jessie Vail (nee Purvis). Marie is survived by her husband, Donald Gordon Henry Harper, and was the cherished daughter-in-law of the late Gordon and Della Harper (nee Hopkins) of Keswick. She had two children, myself, Kathleen Marie Carter (John) and my sister, Teresa Diane, who passed away in 1984. She will be sadly missed by her nieces and nephews, Sean, Pam, Krista, Bonnie, Kelly, Camille and Chris.  In her childhood, Marie enjoyed skating and playing the piano and, as a young woman, worked as a secretary at the Office Specialty in Newmarket. She married my father on September 3, 1959 and they recently celebrated their 60th anniversary. In the 60’s and 70’s, Don, Marie and their children travelled extensively,  making their way across Canada to the Pacific Rim Park on Vancouver Island, as well as to the shores of Newfoundland, James Bay and Key West. Besides raising her family, Marie was active in the Girl Guides, leading weekly meetings as a “Brown Owl” and working at the guiding store in Newmarket. She was President of the Canadian Cancer Society for her area and organized canvassing, as well as events, such as the Daffodil campaign. Marie loved gardening, cooking and baking, hosting numerous family gatherings throughout the years. As a senior, she enjoyed bus trips with Jennie Hopkins, and socializing with the ladies of the Silver and Gold Club. Marie passed away peacefully at Southlake Regional Health Centre in Newmarket, Ontario. Special thanks to her home care nurses, the first responders and staff at the hospital for their care and kindness. In memory of Marie donations to the Canadian Cancer Society would be greatly appreciated. Sign an online book of condolences at mwbeckerfuneralhome.com. Internment details to be posted at a later date.

Share Your Memory of
Marie
Upload Your Memory View All Memories
Be the first to upload a memory!